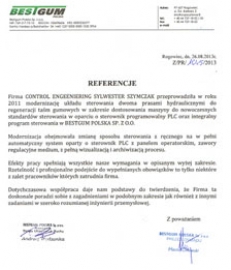 Modernization of hydraulic presses for the regeneration of brown coal conveyor belts at BESTGUM POLSKA SP. Z o.o. Works in 2011-2012 included modernization of the control system for two presses based on a PLC controller, operator panel and a system of sensors and control valves. Complete visualization and archiving of the process. 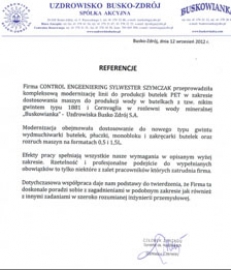 Modernization of the bottling line for PET bottles for BUSKOWIANKA S.A. Work in 2012 included the adaptation of all machines for the production of water in bottles with low thread.

Modernization of the control and I&C system for the flue gas desulphurization installation for units 5 and 6 of Bełchatów SA Power Plant. Supervision over the modernization of the DeltaV control system and the AKPiA for Emerson Process Management Power and Water Solutions. The scope of work included: coordination of design, supervision of assembly and commissioning works.

Projektowanie stron internetowych Master-NETPrivacy policyRodo
This site uses cookies in order to facilitate the use of our website. If you do not want cookies to be saved on your hard disk, change the settings of your web browser. Check out our Privacy policy.
CLOSE
Przewiń